The challenge of finding vegan food while traveling

Travelling as a vegan can be challenging. As vegans still are a minority in this world, there are many places where options for plant-based food are very limited or even absent. This is very much the case in the Alps. Cattle farming is epidemic in the mountains. And that reflects in the food on offer. It is close to impossible to avoid dairy products and often meat, especially in restaurants. But also in supermarkets, the choice tends to be very limited.

So, you’ll find yourself spending a lot of time in finding suitable food, worrying about ingredients in a restaurant, or limiting yourself to French fries, salad leaves and tomatoes. Not relaxed!

Wow, wouldn’t it be liberating to enjoy the mountains, without having any of those worries? If that resonates with you, read on to see how Crazy Camps will satisfy you.

One of several ways in which Crazy Camps can be categorized, is by the food plan. At Crazy Camps with ‘Balance’ in the name, we commit to plant-based food. No ingredients of animal origin are used, and participants commit to not bringing any of those either. This means that you spend a week in the mountains, in an incredible location far away from villages and crowds, without ever having to think about what you can eat and what not!

Reasons for a vegan retreat

There are several reasons why I choose to organise the Crazy Camps as vegetarian or plant-based events:

Now if you’re vegan already, you probably are well aware of the first 3 point. If you’re not, I elaborate them in this version of this article. For me personally, they are the main reasons why I ditched all animal-origin food from my life.

Here, I want to say more about the fourth item in the list: Authentic connection.

In the Crazy Camps, and even more so in the Crazy Balance Camps, connection is a keyword. We are looking to enhance the connection with ourself and with the others.

Authentic connection is not an easy thing to achieve in our quotidian lives. Cerebral patterns, social survival strategies, cultural gender roles, and prejudice are just some of the elements that tend to influence the quality of our connections. They ‘stand between’ us and the others, and even between us and ourself.

When you eat meat or diary, you consume things that are not supposed to be in the human body.

For dairy this is very obvious – mammals produce milk for their own babies, not for different species.

But when it comes to meat, it’s not just (also on a spiritual level) the animals’ suffering that we take in. It’s also a lot of antibiotics, and hormonal imbalance. The animal farming lobby will point you out to the fact that at least the EU forbids to give ‘growth hormones’ and preventative antibiotics to cattle. But there are exceptions to the hormones rule, such as in the case of fertility problems of the animal. And currently fertility problems in cattle are becoming more and more frequent. As for antibiotics: in the world, the industry produces more antibiotics for cattle than for humans. They’re simply not labelled ‘prophylactics’ anymore, now they’re labelled ‘medicine’.

I have been using these two terms mixed in this blog. Now it’s time to make a distinction. There is no official definition of ‘vegan’ or ‘plant-based’ but I would say that even the Crazy Balance Camps are plant-based rather than vegan. Plant-based is the frequent term for food without any ingredients of animal origin. Vegan implies a life style without any products of animal origin. For example: no leather shoes, no wool cardigan, no medicine that was tested on animals. At the Balance Camps we do not consume any ingredients of animal origin. But if you have a pair of leather hiking boots, just bring them. For me personally, it doesn’t make sense to throw them if they’re still good. Just try to avoid buying leather if you need a fresh pair :) The same goes for wool clothes. Plus, in most of the mountain huts where we stay, you will find woolen blankets to sleep under. They are almost always second hand wool blankets from the Swiss army. If you don’t want to touch wool, just make sure to bring your own sleeping bag, even if it’s written that there are blankets in the hut.

So that is the reason that I am loath to announce Crazy Camps as ‘vegan retreats’, I rather call them ‘plant-based holidays’.

This the current offer of plant-based winter vacations: 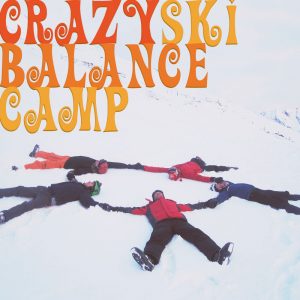 Crazy Ski Balance Camp 2023 Winter sports in a marvelous ski resort, and finding balance in your body!
Skiing, snowboarding, community, meditation, yoga and massage…
You will love this adventure in snow paradise. Join!
February 5 until February 11, 2023 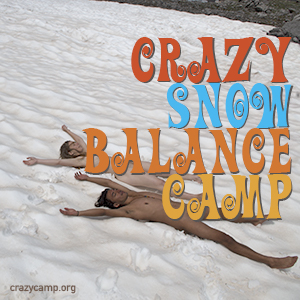 Crazy Snow Balance Camp 2023 How would it feel to enjoy the snow, together with people that value your authenticity?
Conscious winter sports in an empty valley, meditation, yoga and bodywork…
Do you feel the temptation?
Be part of this transformative experience!
February 12 until February 18, 2023

≡ Choose this one for the most zen, most exciting and most immersive experience. ≡
Trip details
The Crazy Ski Camp is labelled ‘vegetarian’. In the description you’ll read that all the ‘organised’ food is plant based, but it’s ok if you bring some cheese or a yoghurt for your own consumption. Meaning that, as a vegan, you’re safe here as well. 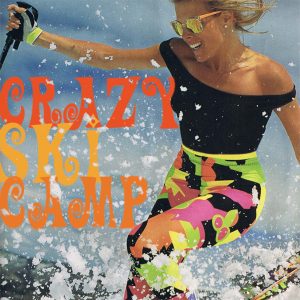 Crazy Ski Camp 2023 Experience community in our fun international group.
Skiing and snowboarding in one of the biggest ski/snowboard areas of Switzerland.
Join this epic week!
February 26 – March 4, 2023

≡ Choose this one for the most intense skiing and snowboarding. ≡
Trip details
· Terms and conditions and privacy statement

By continuing to use the site, you agree to the use of cookies. more information